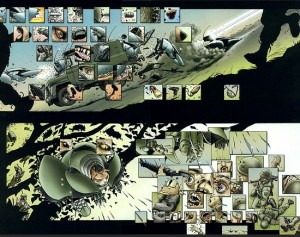 This scene is what I thought the most vivid and impressive scene through the book, We3.  Here depicted the very scene of the animals’ escaping from the laboratory. They escape to pursue their freedom. They want to go “home,” which literally means the place where they come from, but behind it, the “home” could mean the ultimate environment which they are originally from as “wild animals,” not as “pets.”

Anyway, in this scene, the illustration skill is awesome. The illustrator of We3 illustrated this scene with amazing method. He depicted the process of fleeing from the lab and the moment of urgency by using close-ups and lots of small panels in one page. What a tension!! The small panels and the variant of colors in each panel seem like showing the intensive pulsation of the heart. Also, I thought that the splitted panels in each cut show the image of wings. The wings of a bird! Symbolization of Freedom! The three animals are running  toward a freedom and their exact dream is expressed as an image of wings composed of small panels. It feels like the time  is paused in that moment.

For these reasons, I thought this scene is the most wonderful and implicative one!:)

This entry was posted in Uncategorized. Bookmark the permalink.